Get in the know on the latest and greatest marketing and communications news and innovation. Be sure to check back as the blog is updated weekly. Have a topic you’d like to know more about, contact us!
- Any -
Yellowknife, NT
Whitehorse, YT
Iqaluit, NU

This week we learned: Horror comes in all (fun) sizes & don't invite Will Ferrell over for dinner

Hello and congratulations on making it to the end of the week!

Here on the Outcrop blog we're trying out a new thing: each week we'll bring you a round-up of some of our favourite campaigns, updates and news stories from the wide world of advertising. So without further ado --

We can't get enough of Mars Candy Brands' "Bite Size Horror" films. It's one of the best content marketing campaigns in recent history. (Or maybe we just like it so much because two minutes is about as much horror as we can handle!) The short films aired on various Fox networks and the only mention of the brand is in the intro to the film. But what could be a more natural partnership for a Halloween campaign than candy and scary movies? And the fact that they're short two-minute films and on Halloween you get tiny fun size chocolate bars? It's perfect. No need for product placement in these films when, while watching (on the edge of your seat no less), you can't help but reach for the closest treat. Check out the positively chilling "Floor 9.5" here:

They're all worth a watch. And we're not ashamed to say we jumped a little watching "The Road" presented by M&Ms.

We love Twitter but it's no secret the platform has struggled a bit in the last few years in the face of relentless competition and innovation from newer, flashier social media platforms. But now Twitter's reintroduced itself to as a leader in video. At  least that's the plan. Twitter's in-house agency #Fuel, a small team of digital strategists, will work with brands to create quick, reactive, Twitter-specific content. Apparently the turn around time is 24-48 hours. Can't wait to see more content come out of this endeavor!

Earlier this year, Wendy's took spicy nuggets off the menu, much to the dismay of nugget fans everywhere. But great news! They're back! Except Wendy's didn't bring them back, Burger King did. Sneaky! But it gets even sneakier -- Burger King trawled Wendy's Twitter mentions where people bemoaned the lack of spicy nuggets and promoted those tweets. And pulled a similar tactic with billboard placements. This is why it's important to do social listening!

In case you need a reminder to be present with your family and maybe spend a little time off your phone (are you reading this on your phone right now?), here's Will Ferrell being not the best dad in a series of ads for nonprofit Common Sense Media to promote the notion of a #DeviceFreeDinner: 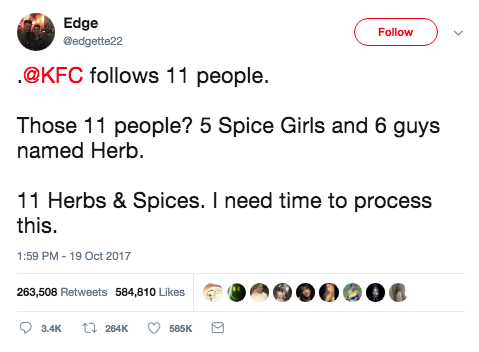 Seen any great ads you think we should know about? Reach out: @outcropcom, @outcropnunavut and @outcropyukon on Twitter and Outcrop Communications on Facebook.